The cost of bailing out giant mortgage lenders Freddie Mac and Fannie Mae is actually $317 billion so far, according to the Congressional Budget Office, 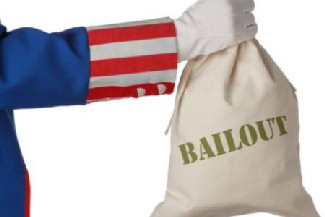 more than double what the Obama administration has claimed.

Before the mortgage giants are cleaned-up it’s likely the government will spend at least $1-trillion on foreclosed mortgages, a Housing Predictor forecast projected more than a year ago. Slightly more than 7-million residential foreclosures have been made since the foreclosure crisis started, and another 8-million homes are forecast to be foreclosed before the crisis is projected to end.

The CBO report was delivered to Congress last week. “Specifically, CBO treats the mortgages guaranteed each year by the two GSEs as new guarantee obligations of the federal government,” the report said. “For those guarantees, CBO’s projections of budget outlays equal the estimated federal subsidies inherent in the commitments at the time they are made.”

The cash payments made to the nation’s government sponsored enterprises, which were taken over by the federal government more than two years ago is $130 billion, but the additional $187 billion in funds are composed of federal subsidies made to Freddie and Fannie. The proceeds are guarantees made by the federal government as part of its agreement with the nation’s mortgage lenders, which would have been bankrupt had the government not stepped in as required by Congress. 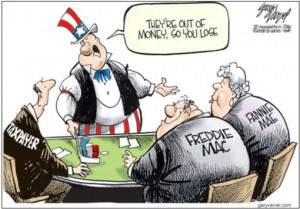 The measure is considered to be a fair-value accounting practice by most accountants, who review such procedures. The confusion surrounding the procedure leads most mainstream media outlets to report the lower figure of losses for Freddie Mac and Fannie Mae encouraged by the Obama administration as it struggles to come up with a plan to successfully slow the foreclosure crisis and aid the hurting U.S. economy.

The federal budget office says that technically by issuing Treasury bonds it sells to the public the government transfers the risk to tax payers, who will eventually be forced to pay off the government bonds. The issue also involves the government’s ability to print more money issuing what appears to be an endless limit of U.S. debt.

“CBO estimated that the subsidy costs of the GSEs new business would total about $42 billion over the 2012–2021 period, an average of about $4 billion a year,” the CBO report said. However, the figure is expected to rise sharply by every real estate economist except perhaps the government’s.