When Arkansas retiree Franklin Huff stepped onto his front porch with his morning coffee and a newspaper, he didn’t plan to break up a meth ring, especially one operating close to the home he’d lived in for more than 20 years in his own affluent neighborhood.

“I noticed black smoke pouring from the chimney, and knew it wasn’t normal,” said Huff of Fort Smith, Arkansas. He placed a call to the city police, who responded and found that the homeowner was cooking crystal methamphetamine.

For something to happen in such a well-respected neighborhood where the average household income is $65,218 is shocking. No one is immune to the dangers of living close to a meth lab, and if you fear that your neighborhood may be involved, watch for the warning signs. 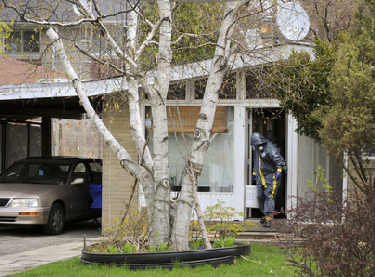 If you notice any strong odors, such as the kind produced by chemicals, then your defenses should go up. Ask neighbors that you trust if they have picked up on any smells such as ammonia, ether, acetone, or cat urine. Such odors can indicate the presence of harmful ingredients used to cook meth, such as benzene, sulfuric acid, and phenylpropanolamine.

While it may not necessarily mean there is criminal activity going on, black smoke is very uncommon pouring out of a homes chimney especially on a hot summer day. Huff wasn’t completely sure that meth was the culprit, but he knew enough to be suspicious, and the police were able to act quickly enough to catch the perpetrator with paraphernalia in his possession.

No one wants to be known as the neighborhood busybody, but if you notice a large amount of traffic visiting a residence, especially in the late evening or early morning hours, you are witnessing a common occurrence in meth cases. Buyers are known to come by at late hours, and the peripheral dangers they bring with them should not be ignored.

Also, law enforcement officers say watch for residents, who black out windows with aluminum foil, plywood, or blankets—all good signs that suspicious activity is going on inside the house.

Owning your own home means having a safe place to live and raise a family. It is also an investment that helps secure your financial future. If someone in your neighborhood is doing something to endanger that, then their rights should no longer be a concern.

Meth lab homes should be properly cleaned before they go on the market to be sold. Federal law requires homes found to be used as meth labs are cleaned by workers in hazmat suits abiding by strict EPA guidelines. It might be a good idea to find out who owns the property. Seek the support of your neighbors. You all have an active interest in the integrity of the neighborhood, especially since the home could be leaking toxic chemicals long afterward.

Law enforcement officers say it’s important to be vigilant and make sure that the property owner—most likely a bank—is doing right by you and not unloading one of these homes at an inordinately low price. It’s not fair to you or your neighbors.