His model like good looks and Southern California sun tan are near trademark, but millionaire 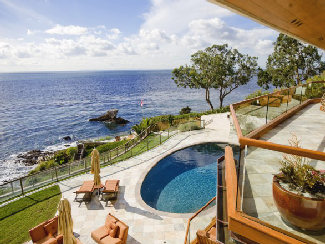 The luxury home salesman appeared in bankruptcy court depressed after selling personal assets, including his Newport Beach condominium and cars totaling more than $2.4 million. His wife of 16 years has also filed for divorce. It seems that without the money McMonigle used to make she doesn’t want anything to do with the soft spoken agent.

McMonigle and his group of agents have made history, and he has appeared on the Oprah Winfrey Show, Access Hollywood, The Insider and even the Home and Garden Channel for his success. McMonigle and his associates have been honored as the #1 selling real estate team by the Wall Street Journal and Lore Magazine. 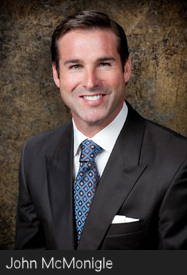 From 2007 through 2010 the group was on a rocket ride through the exhilarating highs in a windfall of financial success in the commission based world of real estate sales. Commission checks were being cashed by the bank almost daily. The riches of success were being celebrated.

McMonigle, 46, amassed properties and other collectibles as fast as the fury of his success, buying a yacht, borrowing $13.4 million for a new office in a fashion plaza location, a multi-million dollar estate and plenty of rental property.

But then like a lot of other people, the roaring market caught up with him and as the music stopped McMonigle couldn’t unload his assets fast enough. He gambled and lost on an $87 million luxury estate in Newport Beach and has suffered through the roller-coaster ride of great wealth as a victim of the U.S. financial crisis. Other homes and properties he owns are in the foreclosure process.

Friends say McMonigle didn’t have any understanding at all of the underlining power that led to his downfall, and had little interest in comprehending Wall Street’s manipulative practices and banking shenanigans that led to the greatest real estate boom in U.S. history.

“If there is anyone who makes it back from a fall like this it will be John,” said a long time associate who would only talk on condition of anonymity. McMonigle arrived in Orange County from his native Oklahoma with just $73 in his pocket in 1989, and within four years was grossing $100,000 a year in Newport Beach as a real estate agent for Coldwell Banker.

After 22 years riding the ups and downs of a tumultuous housing market in one of the nation’s highest priced regions, McMonigle may have lost his fortune, but not his drive.