The brewing storm over the robo signing of foreclosure documents and the resulting halt of foreclosures by four big mortgage lenders could spell another disaster for the housing market. America lured people to a gold rush in properties at the height of its real estate boom and then the banks sold-off mortgages. Now hundreds of thousands of homeowners and former mortgage holders are filing lawsuits to force bankers to prove legal ownership.

Judges around the country are coming to the rescue of many homeowners, ruling that lenders had no right to foreclose since they could not prove ownership under-lining fears that a greater financial threat lies under the foreclosure crisis. 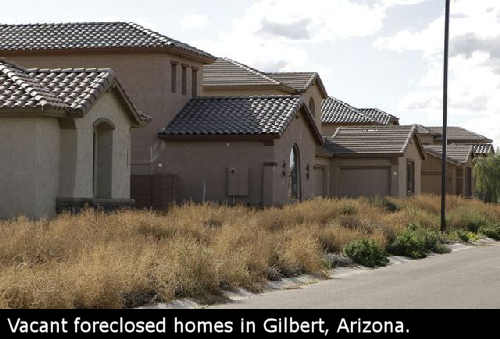 The impact the four mortgage lenders will have halting foreclosures remains to be seen. GMAC Mortgage, which changed its name to Ally Mortgage, JP Morgan Chase, Bank of America, the nation’s largest bank and PNC Financial Services Group all announced the stoppage. The impact of the lenders freezing foreclosures in 23 states could depend on whether title insurance companies are willing to issue policies on the repossessed properties.

PNC, based in Pittsburgh, became the latest lender to halt foreclosures informing title companies late Thursday. The company became one of the country’s largest lenders when it acquired National City Corporation two years ago. Giant National City Mortgage collapsed in fall-out of the financial crisis.

Bank of America, which purchased Countrywide Home Mortgage as the company was failing has also announced it will temporarily halt foreclosures in all 50 states.

The lenders say they are reviewing procedures that employees followed to sign thousands of legal documents a month without determining the accuracy of the paperwork. In many cases, mortgages were sold several times and lenders are reviewing documents to determine that they had the right paperwork to prove property ownership to legally foreclose.

The process is throwing the foreclosure crisis into limbo, halting active listings and pending sales of hundreds of thousands of homes further delaying a housing market recovery. About a third of all sales recently have been distressed sales, most of which are foreclosures. The chief executive officer of one of the nations largest title insurance companies, American Land Title Association believes the questionable foreclosures will ultimately have little adverse impact on the new owners of REO properties or on title insurance claims.

“If a new homeowner’s title is challenged because of a faulty foreclosure, the title insurer may have an obligation to defend the challenge,” said Kurt Pfotenhauer, chief executive officer of ALTA. “However, it is unlikely that a court will take property from an innocent current homeowner and return it to a previous homeowner who failed to make payments on the loan subject to the foreclosure.”

Senator Richard Shelby (R-AL) the ranking Republican on Congress committee on Banking, Housing, and Urban Development is calling for an investigation into the mess. Attorney generals in at least seven states have launched investigations into the dealings surrounding the foreclosure crisis.

Court challenges, however, seem sure to spread as struggling homeowners use every means possible to fight foreclosures against bankers, who have been uncooperative in their dealings with them. As moratoriums play out and Congressional inquiries are launched bankers are cast in the light of the villain for a second time as properties are held off the market that could further hamper home sales and pressure housing prices.