In the midst of the toughest economy since at least the Great Depression, most Americans are just trying to hang on – pay their bills, the mortgage, hold on to their jobs 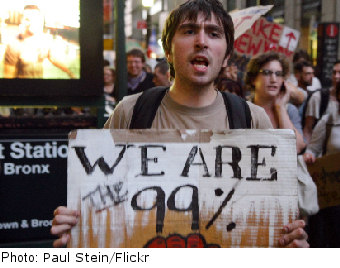 or find new employment. The Occupy Wall Street movement that started outside of the New York Stock Exchange on Wall Street has mushroomed to cities across the U.S. and it’s beginning to show that the protests are catching on to make an impact.

As the real estate research firm that forecasted the foreclosure crisis and saw the financial crisis in the offing years before any other firm, we realized that sooner or later a movement like Occupy Wall Street with the 99%’ers would begin the revolution. We just didn’t think it would take this long. Today marks the fourth week since demonstrators appeared on Wall Street in Manhattan.

When the financial crisis nearly caused the economy to melt down more than three years ago, the crisis had just reached its tipping point. The Bush administration at the insistence of Treasury Secretary Hank Paulson bailed-out the banks and financial firms with a mammoth package to “save the economy” from going into an economic depression or so we were told.

See Inside History, and the president who forced Glass-Steagall to become law to protect Americans from bankers.

Whether the U.S. would have gone into a depression will be up for economic scholars to debate, but the toll Wall Street and financial firms, including the nation’s largest banks have taken on the economy is enormous, including an estimated 7.6-million foreclosures so far. Bankers, including Countrywide Mortgage which went out of business as a result and was purchased by Bank of America designed and developed new mortgage products to sell home loans so that anyone who could sign their name would qualify. 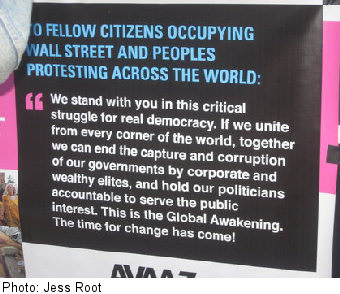 The financial crisis started with the mortgage mess. The banks that sold subprime mortgages and ALT-A loans with as many options to make loan payments as they could muster along with financial firms, shopped for a president to deregulate the Glass-Steagall Act, which was also known as the Banking Act of 1933. They found President Bill Clinton to do the job, who signed the presidential executive order that essentially deregulated some banking activity on the way out of the White House.

Clinton would later regret the move. The law had prohibited commercial banks from taking part in the investment business since the Great Depression when it was enacted under the Roosevelt administration.

In Hyde Park, New York in the quiet rolling hills of the Hudson Valley 91 miles north of Manhattan, a museum is dedicated to President Franklin Roosevelt, where there is a lot to learn from the Great Depression. The Occupy Wall Street movement started as a modest protest in the financial district by young demonstrators opposed to the greed that Wall Street investors amass.

The movement encompasses all sorts of ideas and issues that demonstrators are opposed to but mainly illustrates the need for a system of checks and balances that the forefathers of the U.S. set-up with the Constitution. Corporations have clearly donated billions of dollars to Congressional candidates’ campaign funds in order to buy influence and favors from politicians for their own agendas.

Bankers have done this more aggressively with their lobbyists over the years since working to wipe-out Glass-Steagall. Proposals made by five lawmakers in Congress would reenact Glass-Steagall, but like so many other pieces of legislation is lost in the sea of Congressional abyss.