It was a rags to riches story befitting a movie. Angelo Mozilo, the Southern Californian sun tanned befallen Countrywide Financial CEO finally settled with the Securities and Exchange Commission agreeing to pay $67.5-million in fines on charges related to fraud and insider trading just days before he was to go on trial in federal court.

No one else had come so far and fallen so low in American business history, and no one else has ever agreed to pay such a huge fine to the U.S. government. Mozilo will pay $22.5-million to settle charges, which gets the former CEO $370-million in compensation for his work over five years. The rest is being paid by Bank of America.

As America’s poster boy in the financial crisis, Angelo Mozilo grew up as the son of a Bronx butcher in New York City, eventually co-founded Countrywide and ended up cutting a deal with the government to stay out of jail himself without admitting guilt. 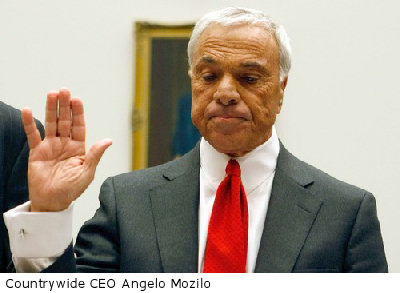 Once the nation’s largest mortgage lender, Countrywide Home Mortgage exploded in failure as the financial crisis jolted Wall Street more than three years ago, and sold to Bank of America for what ended up being pennies on the dollar at $2.5-million. Mozilo’s financial penalty is the largest ever paid by a public company’s senior executive. Mozilo agreed to pay $45-million in disgorgement of ill-gotten gains to settle the SEC’s violation and insider trading charges.

For More: Read Secrets of a Countrywide Insider

Former Countrywide chief operating officer David Sambol and former chief financial officer Eric Sieracki agreed to pay penalties in separate settlements with the government. In settling the charges, the former executives neither admit nor deny the allegations against them. The penalties will also be returned to investors.

The SEC filed charges against the three alleging they failed to disclose to investors significant credit risks that Countrywide was taking as a result of efforts to build and maintain market share. Investors were misled by representations assuring them that Countrywide was primarily a prime quality mortgage lender that had avoided excesses of its competitors in the subprime mortgage crisis.

In reality, Countrywide under wrote and sold increasingly risky loans, including subprime and issued billions of dollars in risky under-lying second lines of credit. Its senior executives knew that defaults and delinquencies in its servicing portfolio as well as the loans it packaged and sold as mortgage-backed securities would result in a national foreclosure crisis, SEC investigators say.

Conde Nest magazine named Mozilo the second worst U.S. chief executive of all time last year, behind Dick Fuld, the former CEO of Lehman Brothers. It was an amazing fall for a man who built a fortune in mortgage lending, developed new mortgage products to sell to home loan purchasers, built an empire in the subprime mortgage market and personally taught thousands of loan agents how to stream line applications to get loans approved.

“Mozilo’s record penalty is the fitting outcome for a corporate executive who deliberately disregarded his duties to investors by concealing what he saw from inside the executive suite, a looming disaster in which Countrywide was buckling under the weight of increasing risky mortgage underwriting, mounting defaults and delinquencies, and a deteriorating business model,” SEC Director of Enforcement Robert Khuzami said.